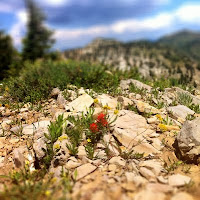 After a planned easy jaunt this evening I'll finish this week with just under 17,000 vert in 6 days to essentially wrap up the hard training for the Wasatch Front 100 Mile Endurance Run in 2 weeks time.  Despite cutting back on the mileage and vertical this week, the pegs felt pretty dead and I felt like I was fighting off a cold.  I made a couple half-assed attempts at getting some decent turnover in the legs but they were pretty tame affairs.  For sure feeling some accumulated fatigue and welcoming the upcoming taper.
I'm definitely having some pre-race jitters and, perhaps as to be expected, am finding myself second guessing my preparation and race plan in fairly neurotic fashion unprecedented by any other races this season (which have been uniformly characterized by no forethought and minimal expectation.)  The last time I recall feeling this wound up about a race was prior to my first marathon in 2002: the Cleveland marathon which I travelled to with P. Terrence McGovern and which turned out to be a spectacular display of suffering (although not so spectacular as Mr. McGovern's display.)  I went into that race with a calf injury that reared it's head at mile 7 and forced me to finish the last 19 miles with a lurching, antalgic stride, eventually stopping the clock at a desperate 2:59:59 (despite having stubbornly forced a number of sub-6 minute miles around half-way).
That 98% of my already limited mental energy is currently devoted to this endeavor (that only a handful of people in the world care anything about and even a smaller handful of whom care about doing as fast as possible), in the context of residency, fatherhood, spousehood, home-ownership, etc, nicely illustrates the peculiar projection and  sublimation characteristic of endurance feats and also provides an immediate and facile answer to the ever-present question of just why in the hell anyone does this: the Sisyphean project of denying death, of course.
With this in mind I will attempt to harness my ever-present death anxiety over the next two weeks to the unlikely project of maintaining a Zen-like complacency.
Mon- 2 hrs with 2300 vert, Bonneville to Black Mtn Ridge.
Tues- 2:05 hrs with 2600 vert from Kaysville out and back, reconaissance on the course.  8x 1 min on 1 min off fartlek
Wed- 2 hrs with 3,200 vert, Lookout Peak with Helfer.
Thurs - off
Fri- 1:45 with 2000 vert up above Alta with 15 min tempo.
Sat- 4:10, approx. 20 miles with 4,700 vert from Brighton out and back on Wasatch 100 course w/ Bethany.
Sun- easy 1.5-2 hours with 1500-2000 vert.
Totals: 6 runs, around 13.5 hours, about 17k vert.  LEWIS! 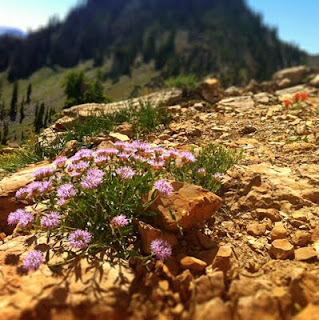 Saturday 8/20/11, Brighton Marathon loop with Jason Berry.
Jason picked me up at 4:15am and we drove up to Brighton, starting out for the first 60-90 minutes or so with our headlamps.  This course is run as an informal race in July but our goal today was just to accumulate some more miles and vertical before beginning the taper for the Wasatch 100 in 3 short weeks.  The loop course initially heads up on Great Western but quickly veers off at Dog Lake to climb first up to Snake Creek Pass then over the rocky top of Clayton Peak (we were greeted here with glimmers of the sunrise).  From Clayton you make a slow, bony descent to Guardsman's pass and then traverse the rolling single track along the Crest trail to Mill D which you descend down to eventually cross the road at Jordan Pines.  (We has stashed a couple gallons of water here).  The route then climbs up Day's Fork to the top of the ridge, traversing across to Twin Lakes Pass and then dropping back down to finish at Brighton.  25 miles, 6,200 vert by my Suunto t6c.  5:12 total time with some time spent early on doing some route finding in the dark.
Felt strong and steady all morning, although not particularly spritely given the approx. 45,000 ft cumulative vertical and 34 hours of running (what I really mean by this term is "running") over the last 2 weeks. 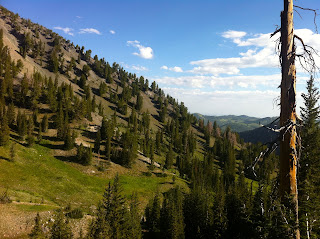 2 hours into the race, about 5,000 feet of vertical completed with about 7,000 still to go, and I find myself in the company of Nick Clark, Scott Jaime, and Joe Grant and we have just spent about 15 minutes climbing an extra 500+ feet of vertical in the wrong direction past 'Larry's Hole' aid station.  As it turns out the pestering and increasingly insistent cries from aid station volunteers far below were directed towards us after all and not merely cheers for passing runners.  A few expletives muttered, we clamored off the steep scree slope and back towards the aid station to pick up the correct trail, now in about 12th-15th places and with a newly found urgency to a run that had felt downright conversational to this point.

Karl Meltzer's sadistic brainchild, the Speedgoat 50k is a true mountain run that begins at Snowbird and climbs and descends a brutal 11,500 feet over the course of 31 miles over single track, jeep roads, creek beds, scree, talus, and snowfields with ropes placed for safety, all between 8,000 and 11,000 feet.

Bethany and I stayed up at Snowbird the night before with my sister Zoe graciously offering to watch Ada during our race.  As we lined up at the start I felt groggy and it slowly dawned on me that I had done very little thinking or mental preparation for what lay ahead.  A heavy (relatively speaking) 4 weeks of training had left my legs feeling pretty dead and I figured I would treat this run as a long training effort in the mountains rather than a real race.  True to form, this intention lasted all of about 5 minutes until I found myself running all alone in no-mans land in 5th place with Nick, Joe, Scott, and one other dude running about 100 yards ahead.  What the heck.  I accelerated to catch up to the back of the lead pack thinking that if I blow up, I'll just have to blow up.

Happily, the running felt smooth and easy all the way over the first ascent of Hidden Peak.  I found that I had a lower threshold than the other guys for breaking into a fast hike on the steeper stuff but didn't ever lose any ground in doing so and my breathing and effort felt controlled.  At the same time I knew I was in over my head based on the company I was with which gave me a jolt of excitement.  All in all it worked out pretty well mentally as I was just pretty damn pleased with myself to be climbing with the likes of these guys in a race like this.

We crested Hidden Peak as a group of four but then quickly spread out on the nasty technical traverse and descent off Baldy.  Per usual form I was a wussy on the downhills and got gapped pretty significantly here despite the fact that I was wearing huge, baffoonishly-cushioned, downhill-confidence-inspiring, Meltzer-sanctioned clown shoes.  Joe and I were a study in contrasts on this section as he basically floated down the steep loose terrain barely touching ground clad in the Tarahumara-esque New Balance MT 110 prototypes.


I gradually made up the gap on the climb to Larry's Hole where we then proceeded to lose between 20-25 minutes going off on flagged trail that we weren't supposed to be on for another 10 miles or so.  Realizing that I wouldn't be in it for the win anyway it wasn't too big a deal to me but it was pretty energy-zapping to rejoin the course now having lost about 8 places or so. Somewhere in rejoining the course Scott Jaime fell back a bit and I didn't see him till the end of the race. I was able to pass a few folks on the long, difficult creek-bed descent to Pacific Mine but this was a tough stretch for me and I quickly lost sight of both Nick and Joe.  On this stretch into the aid station I ran and chatted a bit with Andy Dorais, another resident physician at the Univ. of Utah in Emergency Medicine into the aid station.

I caught Nick and Joe at the aid station and headed out shortly after them (in the process learning that Karl had now designated $1000 bucks for the winner given the off-course meanderings.)  Nick Pedatella, who had stayed on course, had about an 8 minute lead leaving the aid station.  Joe and I traded places for a while, pulling each other up the interminable climb back up to Hidden Peak but about half way up things started going south and I began bonking in earnest: a state unimproved by a 500-700 foot near-vertical grunt off trail up the side of a slope that had me stopping every 5 steps to avoid what felt to be an impending black-out.  Vision black around the edges, I finally topped out and took about a minute breather to regroup and get some calories and fluids in (had neglected this domain in my haste after going off course).  I stumbled off towards the tunnel and another seemingly unending descent before the final climb up the Peruvian Ridge.

While I felt like shit on the whole descent I began to feel pretty good again climbing the long spine back up to Hidden Peak, due in part to the renewed commitment to nutrition but also because of the spectacular scenery.  Despite climbing well I was now pretty far behind the two Nicks and Joe and knew that I didn't stand much of a chance of gaining ground on the 5 mile descent to the finish given my respective downhilling ability over the course of the day.  I focused my efforts instead on enjoying the last hour or so of the run and maintaining my 4th place- which I did until the finish.  6:23:25.  Without the detour this would have been close to 6:00 by my watch.  At the finish I was surprised to learn that Nick Clark had passed Nick P in the final miles to take the win by a few scant minutes and Joe was not far behind for 3rd.  Impressive stuff.

I hung out a bit at the finish line drinking some fluids and chatting and then cheered in Bethany, first Nannie to cross the finish line for a prize of 500 smackaroos and a nice new down puffy with a time of 6:44:30.  I then spent the rest of the afternoon basking in her reflected glory and congratulating myself for staying ahead of her all day.  In what has to be a first, she actually looked worse than I did upon finishing this one: probably something to do with having spent 2 weeks in Ghana with little running and then very minimal running for 2-3 weeks following due to injury.  Our recovery for this one was not helped by the fact that later that evening we boarded a red-eye flight to Maine with a squirmy Ada and slept about 7 minutes total.

Chris Helfer, finishing his first ultramarathon ever, placed 32nd in an impressive 7:26, becoming so hypomanically-excited and disinhibited in the process that he then proceeded to immediately sign up for running over 3 times that distance at the Bear 100 in a short 8 weeks time.  I like the cut of that man's jib.

A couple photos of the course from Tetsuro Ogato's FaceBook postings: 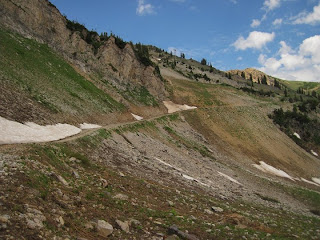 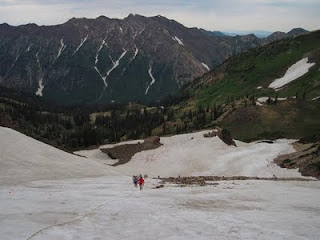 And check out some recent video of running in the Wasatch:

http://www.youtube.com/watch?v=1g1b-ZAKNqY
Posted by LEWIS at 5:42 PM No comments: