Over the last few days I've tried to mentally put together an account of my experience at the Wasatch Front 100 Mile Endurance Run and have come up short.  Maybe it's been the post-race cognitive fog (it seems this is a unique post-100 mile state facilitated by sleep deprivation, prolonged bodily pain, metabolic dysregulation, and emotional exhaustion.)  Maybe it's the fact that this mental state has been exacerbated by wisdom teeth extraction and the subsequent narcotics (yesterday).  And perhaps it is due to the fact that I take my boards in two days and feel an immense pressure to spend my waking hours studying (and an equal pressure to procrastinate by blog writing).  Yes, these factors certainly must contribute.  But the writer's block seems deeper and due in large part to intrinsic aspects of the distance and experience itself- indeed, I recall the same paralysis in trying to describe my first 100 miler last year, the Bear 100. (race report here).

Every race, even an 800m run, has a way of disrupting the normal progression of time, offering up a seeming lifetime of small moments, sensations, and emotions within a small window of chronological time.  Jarred out of your previous life, for a moment you exist in a different space.  Perhaps it is this cracking open of the world that keeps me coming back to these ridiculous endurance pursuits.   From my limited experience in really long running events it seems that the 100 mile distance is uniquely suited to the production of this phenomenon.  To risk invoking the tired metaphor of psychedelics and the overused, quasi-mystical, pseudo-spiritual, and soft-headed Merry-Prankster associations thereof, if a track event provides the equivalent of the brief dissociation following inhalation of nitrous oxide, a 100 mile run is a prolonged, epic, frightening, brain-scrambling, and ultimately world-altering LSD trip.  Words can elude.

It is also a long, plodding, block-legged, relatively mundane shuffle in the woods experienced predominantly as the increasingly unpleasant and gag-inducing sensation of forcing foil-wrapped simple sugars into your mouth at 20 minute intervals.

What a weird sport.

The first 40 miles went by quickly.  I didn't feel particularly great- the legs felt tight and my effort was higher than I had wanted but I was moving along fairly well.  I ran a number of the early miles with Chris Cawley and then Brendan Trimboli which was a lot of fun but I noticed that both of them seemed to be moving much more fluidly and effortlessly than I was, particularly on the climbs. (These guys are both impressively fit but were hampered by stomach issues and, for Chris, getting off course.  Look for good things to come in future events.)  As expected, both achilles started barking at me after the first 15 miles or so but didn't ever get to the point of altering my stride too badly.  I came into Big Mountain in 5th place- right around my goal of 12:30pm- feeling good if a little hot and excited to see family and pick up my dad, Craig, who would be pacing the next section to Lambs Canyon.

Within the first two minutes of the first climb however it became clear that this hadn't been the best of plans.  Having come from sea level without having done much running recently and being relatively unfamiliar with rocky trails my dad quickly fell off the pace and I didn't see him again until I showed up at Brighton at mile 75.  I became increasingly worried about him out alone in the hot sun (this section is notoriously exposed and toasty) but this concern faded with the exponential increase in self-pity as I ran out of water, stopped sweating, developed goosebumps, stopped eating, and dropped my pace to a crawl.  The stretch from Alexander to Lamb's Canyon was harder for me than the whole 2nd half of the race combined.  I came into Lamb's feeling pretty wrecked and discouraged not sure how I was going to turn this around.

Had I been left to my own devices I would have spent 5 minutes, forced down as much fluid into my rebelling stomach as I could, and then hurried out eager to not lose too much time.  And that likely would have been the beginning of the end of my race.  Rather, Peter and Bethany sat me down and spent 15 minutes putting cold towels on me and pouring ice water on my head and down my back until I was shivering.  Matt Hart was there and remarked that when he ran this in 2010 (3rd) he felt the worst right here at Lamb's.  This gave me a good deal of hope that things would improve.  I then walked all the way up to Bear Bottom Pass without running a step (per Peter's instructions) and by the top of the climb I had fully rebounded.  I caught up to Brendan Trimboli and Adam Lint on the climb up to Dog Lake, now moving into 3rd (although well behind the first 2 runners).

For the duration of the run from here I was surprised to find myself continually feeling better and better, and then surprised again to find myself genuinely enjoying the present moment.  I found myself remarking repeatedly to my trusty pacers- Peter, and then Bethany- that I felt great and was really having fun.  This was certainly not what I was expecting late in the race- sure, I looked forward to 'fun' in that abstract and contradictory sense that ultrarunners use to describe epic sufferfests marked by continual vomiting and crawling forward progress, where you look back days post-race and it all has a hazy glow of appreciation and gratitude that was markedly absent at the actual time- but I didn't anticipate actually experiencing pleasure in the later stages of the race in any honest sense of that term.  (This is probably where my constitution diverges from the truly tough such as Jared Campbell who, as impossible as it sounds, actually seems to derive vast quantities of enjoyment out of genuine suffering- a quality that likely explains his success this year in doing the Barkley, Hardrock, Nolan's 14, AND Wasatch.)

The last 25 miles from Brighton to the finish with Bethany passed quickly (5:55) save the last few miles.   I grunted the uphills as fast as I could and ran the flats and downs fairly well all things considered.  We were talking about this and that, the temperature was perfect, the stars were out, I was with the love of my life: it was a truly special night and I kept pinching myself telling myself to remember this.  I felt so lucky to be out here, running the last stretch of the Wasatch 100 with my wife, and feeling totally great.  While I haven't done many of these things I knew that the way I was feeling was unusual and lucky.  At Pot Bottom (mile 93) we were told that there was a pack of 'around 10 guys only minutes behind me'.  This was quite a surprise as at Pole Line we had been told that we had about an hour lead on #4.  While this did encourage some faster running in the last 7 miles it had an air of desperation about it.  I had flashbacks of getting outkicked on the track in high school conference meets and kept looking back to see if there were lights coming.  (As it turned out the aid station volunteers must have had their wires crossed as we had a good margin the whole time).

We ran 8 minute miles along the last short stretch of road to the finish where we found my dad, Zoe, Billy, and GG the dog cheering us in.  Given the way I had been feeling I anticipated a pretty mild post-race aftermath but almost immediately after crossing the finish line I felt incapacitatingly wrecked.  We made our way to the cabin that Jason and Kristin Berry had generously offered us to share.  We showed up at 3am (having had to call Kristin to get directions)- now 5 people and a dog instead of the 2 that we told them to expect- and I promptly starting chundering all over their driveway.

All in all I think I caught a lucky break.  The race went about as well as it possibly could have given pretty mediocre training and fitness.  I was definitely more fit last year before the Bear but it is hard to overstate the difference it makes having a solid stomach all day and being able to continually take in calories.  It is also hard to overstate just how much of a difference my crew and pacers made- these guys really saved my race and made for a much more enjoyable experience- thanks so much.  Thanks as well to all the great volunteers out on the course who really supplied a ton of positive energy and congrats to all the other finishers.  The only way I can see not running this race in the future (lottery permitting of course) is if Bethany decides to do it and I get to pace her instead.

Uncharacteristically, here are a few relevant details.  As this formula seemed to work for me I would at least like to be able to refer to it in the future:

Fuel:
-Basically all gels except for one package of shotblocks, one honey stinger waffle.  Primarily EFS.  Took about 100kcal swigs every 20-25 minutes.  Carried 2 bottles, 1 of which was either Heed or EFS drink which gave an additional 100kcal or so over 2-3 hours.  In total probably around 300-350 kcal per hour which I did for the whole time except for the stretch from Big Mtn > Lambs where I wasn't able to eat.

-No caffeine at all until Brighton where I downed a 5 Hour Energy.

-In retrospect should have carried one extra bottle from Big Mtn > Lambs.

Shoes:
-Started in Montrail Rogue Flys for the first 53 miles then switched into Hoka Bondi Bs for the remainder of the run.  In retrospect should have switched out shoes at mile 40.

Temperature regulation:
-Towels doused in ice-water were key.  Also taking off shirt and soaking it in streams on the way.  Should have cooled more aggressively earlier in the day.

Just a few photos from the last couple weeks leading up to tomorrow's Wasatch Front 100 Mile Endurance Run.  Really looking forward to a good long run in the mountains.  I've assembled a rockstar crew and pacing team (Bethany, the whole Lewis family, Peter Adler) so this run should stand in stark contrast to my first 100- the Bear last September- which was characterized by no crew, pacers, or planning whatsoever.  Regardless, it should be an epic week with a 100 mile race, wisdom teeth extraction on Tuesday, then my National Board Exam on the following Friday, and then starting my new job Monday. 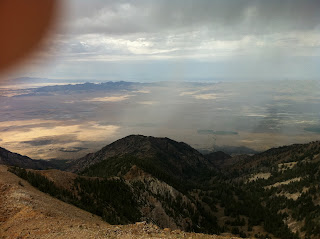